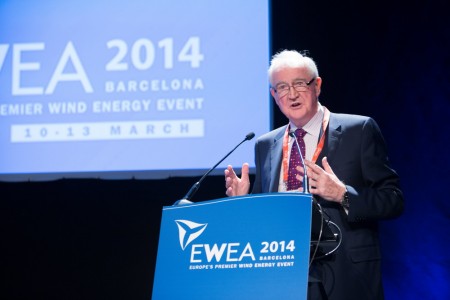 Eddie O’Connor, Irish wind energy entrepreneur and visionary – and winner of this year’s Poul la Cour prize for excellence in the field of wind energy – spoke to Sarah Azau at EWEA 2014 in Barcelona about his career so far, why climate change drives him in all he does, how to bring offshore wind prices down, and why wind and solar power are a winning team.

How do you feel about winning this award?

Andrew Garrad [EWEA’s president, who presented the award] is a really good guy, so it is very meaningful to receive it from him.

What for you is the most important discussion affecting Europe’s energy mix today?

We should be preoccupied with the fact that we can’t penetrate more than 30% wind in any one country so we need grids, we need a single European market for electricity – and we need to think about how it affects customer price wise.

How do you get the cheapest price? Well you build your wind offshore, where there are high capacity factors of up to 54%. Then you put your solar power in the south where the sun is. To have minimal cost renewables, you have to put wind and solar together. The price of solar is collapsing and it must continue to do so. In Europe we need to work on distribution and storage – we have a vested interest in all of this, we must ensure it happens, like it has in California. We’ll lose our lead here in Europe if we don’t adopt similar strategies.

You mention offshore wind – what needs to happen for it to become cost competitive?

You need bigger ships and dedicated ports, more experience with wind turbines and bigger wind turbines, 6 MW, and lots of know-how, special cranes. We’ll be able to see £150 per MWh today go down to £100 per MWh by 2020.

If you can build turbines on land and transport them out to sea prepared, in principle in one day you can load the ship, drive out and put up six turbines. It would make a gigantic difference to cost. We should be joining up with the photovoltaic people. We will supply the solution. How can you say power is cheaper in US when it’s all done on tax breaks, the industry in 2012 lost $8 billion, so how much is gas really? You can’t build an industry that loses money – I’d love to know the true cost of shale gas… You should do a proper environmental impact assessment – see how much methane it is letting into the atmosphere.

What do you see as the highlight of your career?

Well I built some very elegant engineering systems when working with the Electricity Supply Board in Ireland, then I went to Bord na Móna. When I arrived the company was losing 17 million, when I left we were making 5 million with 40% less staff. Then of course building electricity and wind  farms was very exciting – you got into the right area at the right time, economies were growing at that time, so I got lucky! Actually today the big achievement is still being alive today after three crises as we’ve had since I started Mainstream Renewable Power – first the financial collapse, then 2010 with investors not wanting to invest in Euros, and again in 2012.

You have been described as a visionary… why in the mid 1990s did you decide to put your money on wind energy?

I became a CEO just before 40, before that I was running a peat company, I was the biggest polluter in Ireland!  Then I met the scientist John Tyndall who passed radiation through various gases, and he found some of the light went through with no effect, and CO2 and methane absorbed stuff. It’s a scientitifc fact that when content of CO2 goes up, we are changing the climate of the planet. I became convinced of that in 1989 – I build first wind farm soon afterwards, and when I left that company in 1996 I shortly afterwards away set up Airtricity.

We are here in Barcelona at EWEA 2014 – what would you say to the Spanish wind energy sector, which is going through a difficult time?

I’d build grids, I’d integrate Spain and Italy, the Mediterranean area into the rest of Europe. Spain needs much bigger grids, linked profoundly with northern France, UK, Germany, east-west, and north south. I’d say to them, we all have tough times but remember that there is light at the end of the tunnel, with wind energy you’re not importing all that gas, you are saving billiions of tonnes of CO2, it’s a big native industry.