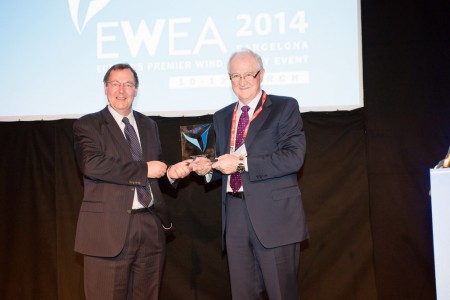 “This year, the award goes to someone who is a very rare breed: both a visionary and a businessman”, commented the president of the European Wind Energy Association (EWEA) Andrew Garrad, presenting the award in Barcelona at the EWEA 2014 Annual Event.

O’Connor co-founded Irish wind farm development company Airtricity in 1997 – at a time when wind energy was a minor player in the energy mix – and acted as chief executive until he sold the company for around €2 billion to E.ON and Scottish & Southern Energy in 2008.

He went on to set up Mainstream Renewable Power, now six years old, which has 180 staff and offices around the world, and was until 2013 a member of the supervisory board of EWEA.

“Eddie is a very great colleague and dear friend,” said Garrad. “No-one could be more deserving of the Poul la Cour prize and it gives me enormous pleasure to award it to him.”