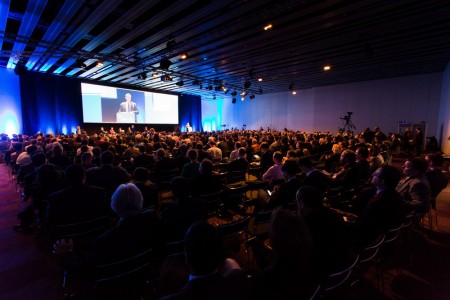 New markets, technological breakthroughs and an end to political uncertainty – that’s just three of the advances the wind energy sector is expecting in the coming years, revealed industry leaders at the EWEA 2014 Annual Event in Barcelona.

“We will see advanced technology that is subsidy free,” said Anne McEntee, Vice President of Renewables at GE.

Andrew Garrard, EWEA President, warned that the current crisis in Crimea shows how dependent Europe is on fossil fuel imports. “The situation in Crimea is a wake-up call for all of us…it demonstrates the vulnerability of our fossil fuel supply”, he said. An ambitious 2030 renewable energy target would boost Europe’s renewables fleet and, in turn, energy security since President Putin cannot turn off the wind. Every EU citizen pays €2 a day for fossil fuel imports – or a total of €1 billion every day, he told the audience at EWEA 2014.

With over 150 companies and associations signing the “2030 declaration” – which calls on EU leaders to agree to ambitious and binding renewable energy targets at national level – the industry united at EWEA 2014 to ask EU leaders to make the decisions that will bring supply security to Europe.

“An ambitious target, binding on Member States, is the most cost efficient way to realise our goal of 100% renewables in the long term. Not to mention boosting a sector which provides 250,000 people with work in Europe”, said EWEA 2014 conference chair and managing director of ENERCON, Hans-Dieter Kettwig.

For those seeking inspiration, the conference did not disappoint. Brazil, Mexico and South Africa triumphed as new markets brimming with wind energy opportunity. Ten leading CEOs revealed their company’s strategies for survival, attendees heard that Google is looking to make more investments in wind, and Maria van der Hoeven, Chief Executive of the International Energy Agency, talked on the IEA’s support for 2030 renewable energy targets.

Meanwhile, EWEA released new material detailing the costs of fossil fuel imports to Europe, the IEA got frank about the effects of fossil fuel subsidies, and a separate EWEA report delved into a less publicised field – the massive consumption of water in the fossil-fuelled power sector.

The event in Barcelona has now drawn to a close, but attendees full of new information, contacts and partnerships will certainly be looking forward to EWEA 2015 in Paris 17 – 20 November.