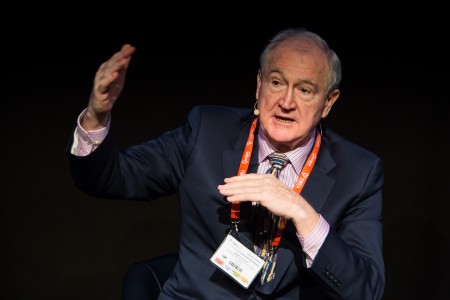 Wind energy can create hundreds of jobs as part of a new climate change-aware world, said Eddie O’Connor, founder and CEO of Mainstream Renewables. O’Connor described this point in time as a “massive opportunity to go entirely renewable.”

He was referring to today’s threat of rising sea levels which could swamp many of the world’s major cities – a consequence of climate change in turn fuelled by carbon emissions. The fact remains that we are emitting the equivalent of “four Hiroshima bombs into the atmosphere every second of every minute of every day,” he said at EWEA 2014 in Barcelona.

And, if we ignore the threat of climate change, “how do we actually get the money to pay for the consequences?” he asked. If we don’t pay attention to climate change, we might not have a species, he warned.

By 2050, 90% of the EU’s electricity can be powered by renewables, O’Connor said. Meanwhile, for Paolo Frankl, head of renewable energy division at the International Energy Agency (IEA), a level of 58% renewables by 2030, rising to 70% by 2050 is attainable.

But to reach these levels “we need a robust CO2 price, a price that has a meaning”, greater flexibility in electricity markets and more interconnections, Frankl said. We need to work out how to fit in new power generation and phase out the old – “this is a massive power transformation,” he said.

Alexandre Affre, director of industrial affairs at Business Europe, backed the call for a stronger carbon pricing as part of the European Emissions Trading System. He also said a greenhouse gas reduction target for 2030 is needed, and said that Europe must continue to build renewables. However, he questioned whether or not Europe has been “too quick” and has “gone too far” with its renewables build-out, chiding the continent’s “excessive subsidies” and questionable priority grid access for renewables, he said.

Turning to another issue high-up on the energy agenda – costs – Frankl underlined that the high price of fossil fuels is the driver behind today’s high energy prices. “The high prices of fossil fuels is the problem number one in the last five years in Europe,” he said. Rounding-up cost the issue, O’Connor asked: “What can be cheaper than an energy system based on 95% free fuel?”